Firstly – it’s so important that right now you click this >>>>link<<<<<. If you do that you’ll be whisked away from here to some absolutely wonderful, inspiring and loving words written by my wife Heather. the great news is that she is beginning to write some more bits and pieces and I need you to know that it’s definitely worth reading and following what she writes. So go and click that link, right now. You can come back to this later.

Stirred by her blog movements and my own procrastinating desires, I thought I’d pick  up the ‘Throwback Thursdays’ again. This is a Thursday post which I take a little look back at the Story of the Christians, from the early times when the Church first started through to current days, to see what we can learn from the good bits and not so great bits! Hopefully we’ll learn something new along the way. I’ve heard some great feedback and had some interesting thoughts regarding some of the #tbt posts, I’m glad it may be causing some thoughts and conversations, feel free to drop me a message or comment if you want to continue the conversation. Anyway, I’ll crack on from where I left off last time and lets see how we get on. 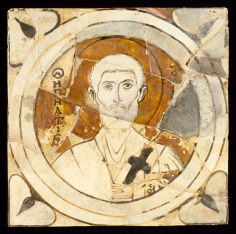 Today I’d like to introduce you to somebody new. A man known as ‘Ignatious’. With his name sounding like a volcano, I guess you could say that some of the things this Bishop of Antioch in the early 2nd century wrote was rather ‘eruptive’. I’d personally say positively and negatively (just to point out, I’m sure most of us put out there a mixture of positive and negative things, we’re all a working progress!). Actually, we already met him in the previous post on ‘the whole church’, as it was this guy that first used the original term for ‘Catholic’ when speaking about the church. However, today I’d like to look a little more at what Ignatious wrote. Particularly one letter he wrote to a church in a place called Smyrna, which is located in modern day Turkey. In it he talks about a bunch of stuff, but I’d love to point towards something particular he referred to.

In his letter, Ignatious referred to something called ‘docetism’ (say it ‘dough-seet-izm‘ if you’re wanting to slip it into a chat with mates to sound intelligent). It comes from the word that translates today to ‘it seems‘, ‘it’s similar to‘ or ‘it’s like‘. Those who would align with docetist beliefs in Christianity were saying and believing that Jesus ‘seemed’ like a man when he was on Earth, but wasn’t really. They considered Jesus more of a spirit-like figure, not fully embracing all the complexities and limits of us humans. They felt that as God is so good and perfect, there is no way that He would come to Earth and embrace the imperfect bodies that we have. Ignatious did a great job in his letter to explain the realities of Jesus. That he was a man, who had a real body, who truly suffered, who truly died, and truly resurrected, and after the resurrection had a real physical body, eating and drinking with his buddies. He made it clear that this wasn’t some fable, Jesus wasn’t a mystical, ghost like person. He is real.

Docetism was an early form of what became known as ‘Gnosticism’, of which over the years tons of groups branched from it, but fundamentally carry some conflicting messages to what the Gospel actually says about me, you, the way we interact, and who Jesus is. They reduced him down to something less than he truly is which suited their beliefs and ideals but ultimately doesn’t follow what the Bible says.

This got me thinking, where in my life have I done that? Made Jesus into some mythical, distant, unrealistic type figure rather than the true, powerful, life transforming, compassionate Saviour that He is? I’m definitely not a ‘Docestist’ and wouldn’t stand by their beliefs of Jesus’ humanity, but I’m sure there have been times in my life where my attitudes, choices and behaviour may resemble a docetist. Thinking and treating Jesus less than He is. Ouch. That one hurt when I began to answer that.

I know there have been times in my life where I think of Jesus’ humanity so distant to mine. I’ve thought that He couldn’t possibly understand the depth of human experience that I go through. The ups, the downs, the joys, the pains, the sadness, the fun, the laughter, the sense of loss, and the sense of ‘new’ things. The last couple of years I’ve had the joy of starting new projects in church and ministry, and there have been the great fun moments of adventure that I adore, as well as the times of pain, difficulties, trials, and disappointments that I’ve faced. And the ‘ouch’ comes when I realise that in some of those times, I didn’t look to the one who’s been through the ultimate physical, emotional and spiritual pain. Instead I looked to myself as if I’d be the answer to my own problems. Good one Benji.

However when I pull my head out of hiding and begin to glimpse at the truth, I see so much more of His goodness. All He’s experienced and been through for me. Realising that He does relate to me. My minor setbacks in life fade in comparison to the immense and intense experience he faced 2000 years ago. And as he has experienced it, he has the empathy, encouragement and advice for me that beats my own (and everybody else’s) hands down. He is real. He went through full humanity for me. He understands. He knows what’s going on. He is big enough to cope with it. So approach him today, with what you’re heading towards, what you’re struggling with, what you need help with. He’s not just mildly interested, he is deeply passionate to show his love to you and help you through.

How about you?Ever looked upon Jesus as something less than He truly is? Ready for an ‘ouch’ moment?

What do you think? Continue the discussion below... Cancel reply